Our intrepid founder Andy Hayes, has spent the past three weeks travelling down the West Coast of North America from Vancouver to Los Angeles. On a previous trip, he spent four months traversing Canada from Nova Scotia to Vancouver Island. The boundaries between Andy’s working and home life are heavily intertwined; his love for the open road and passion for exploration drawing obvious parallels with the vehicles produced at Arkonik. With a client network across North America, it seems fitting that Andy dedicates his “down time” getting to know this vast continent via the network of highways, trails and paths that connect it.

“When I arrived and saw my van on the driveway it was exactly as if I’d just left it a few days ago…. sparkling clean and ready to roll…It feels good to be elsewhere, it feels good to be uncertain about where I’ll be tomorrow…”

After touching down in Vancouver on Canada day, Andy collected his trusted Dodge Ram camper (aka RamBeau) and Cannondale Caad X bike (nicknamed ‘The Brown Bomber’) to hit the road and begin his latest adventure. First stop was Seattle and the pouring rain for two days. This didn’t stop Andy exploring the Emerald City by bike along their excellent cycle lanes (and “meeting” Jimi Hendrix!).

Andy’s plan was to drive around 150 miles per day down Route 101 / Route 1 all the way to LA; stopping when he could see a good 50 mile loop to cycle back around. 200 miles out of Seattle on the Washington/Oregon border, Andy stopped at Cape Disappointment where the Pacific waves and strong gales collide with the Columbia River. This headland was a key strategic defence location during WWII, but was originally named by fur trader John Meares in 1788. Meares narrowly missed the discovery of the Columbia River and the vital trade route that went right heart of America. In 1805, the area was claimed for the United States by Lewis & Clark, when they finally reached the mouth of the river on the cross continent trek, linking the United States from the Atlantic to the Pacific.

On into Oregon to hit the Oregon Coast Highway allowing Andy to hug to coastline all the way to the border. Stop offs included Cape Lookout, Searose Beach, Ophir and Wedderburn, before entering California. This stretch of coastline includes the Discovery Trail with it’s stunning views out to the Pacific as well as fantastic inland trails along the logging routes, which made for some fantastic cycling. Andy headed out on the Brown Bomber into the miles of trails, and doesn’t mind admitting he got well and truly lost on occasion (as all adventures must do)…

“Everywhere I looked, in all directions, there was no sign of life. You really have to rely on your wits and I ended up having to hoist the bike onto my shoulders and wade through, waist deep through creeks on foot back down to the sea.”

From there, Andy crossed into California and cut inland to Redding to explore the Shasta Lake National Park with its “magnificent cycle paths’. On to Sacramento and across to Lake Tahoe for the Arkonik press event; an off-road experience into the depths of the Eldorado National Forest in three Arkonik Defenders.

“It was a joy to be wheeling through the forest, enjoying but taking care of the surroundings, whilst encouraging others to overcome their fears and have fun. Reaching the 7000 foot summit overlooking Thunder Mountain was a lunch break to remember; great people, great food and a marvellous sense of peace and solidarity among the team, that had everyone smiling.”

Back on the road a few days later, Andy headed into the Golden Gate National Recreation Area where there was not a campsite to be found. Instead he spent the night at the Marin Headlands Hostel, met some great people and enjoyed some time around the Sausalito area, visiting Point Bonita lighthouse, the Cold War museum and Headlands Center for the Arts.

“I had a great meal at The Trident and would highly recommend a visit. I was sitting there, watching the sun go down across the bay when a sea lion popped up right in front of me to say hello! Close encounters with animals are so very precious to me.”

Heading across the Golden Gate is something that must be done by any self respecting traveller and Andy headed into San Francisco. He spent three days there cycling around the city, including Columbus Avenue; home to the famous City Lights Bookstore, absorbing its non-conformist and daring history.

Continuing down through San Jose and back out to the coast, Andy arrived into the Big Sur region, staying at Treebones; an eco-resort with oceanfront yurts. Big Sur is a special place on the California coastline. They are a small community and are largely self governed. Their values fit well with Andy’s own environmental ethos:

“Share our coastal roads in a safe manner. Be mindful of the impact of my actions. Protect and respect Big Sur’s natural resources, public and private property, residents, employees, and visitors. Leave no trace; and not damage or take what is not mine. Camp only where allowed. Be vigilant and fire safe. Be a steward of this precious resource for the enjoyment of all. Honor the spirit of Big Sur as it honors me.” (The Big Sur Pledge)

The last leg of the trip took Andy down the Cabrillo Highway and Route 1 into Santa Barbara and finally LA, stopping off at El Capitan. This section of highway is continuous and permissible for cycling, meaning a great chance for Brown Bomber to set a few new distance and speed records.

During the final few days, Andy spent time with his old friends the Kims, cycling around with Larry and having fun around the LA viaducts made famous by Grease, Terminator and The Dark Knight to name but a few.

For now it’s back to the “day job”, in amongst his A-Team and Defenders. He is excited for the next leg of the trip when later this year he’ll continue to circumnavigate North America with RamBeau and The Brown Bomber across Arizona, New Mexico, Texas and into Louisiana.

In the meantime why not catch up with Andy through Strava (Andy Hayes - Bath). 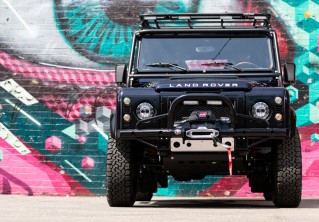 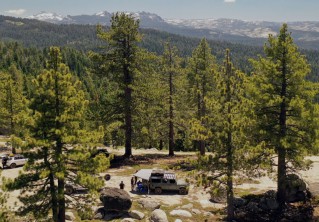