A world exclusive; our first-ever 6.2L LS3 / 6sp Auto Arkonik Defender has arrived in Westlake, TX. This jewel-like pocket powerhouse now sits alongside a prestigious line-up of Ferraris and exotic Porsches as the favoured ride of this Texan owners sports car collection.

”I’ve been following the Defender Series for many years and I had a hard time finding a company that could restore Defender until I found Arkonik.

The Corvette 430hp engine and 6sp automatic transmission might grab the headlines, but VIPER’s talents don’t stop there. Powerful 6-piston brake calipers and road-biased lowered suspension, combine to provide the driver with engaging and assured feedback.

Another first for Arkonik is the tech-laden Dakota digital dash. With illuminated needles, dials and high definition LCD display, this dash catapults the Defender into the digital age. In addition to the sculpted sport front seats, this dynamic D90 also has power windows, power locks and a Lokar gear shifter.

“I’ve been following the Defender Series for many years and I had a hard time finding a company that could restore Defender until I found Arkonik. The Defender has always been THE off-road vehicle I wanted to add to the collection.

I wanted a color and interior combination that was spectacular. After owning several Astons that were built under their bespoke program, I fell in love with the British Racing Green color. The uniqueness of that color was a perfect match for my D90 which matches my car collection. After now driving this Defender, I’m probably going to drive this more than those cars and will display it alongside my Singer and Gunther Werks Porsche as well as the Astons at various car meets.” 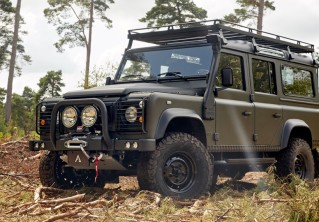 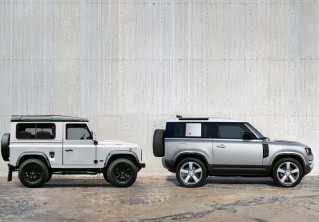 New Defender: Welcome to the Family